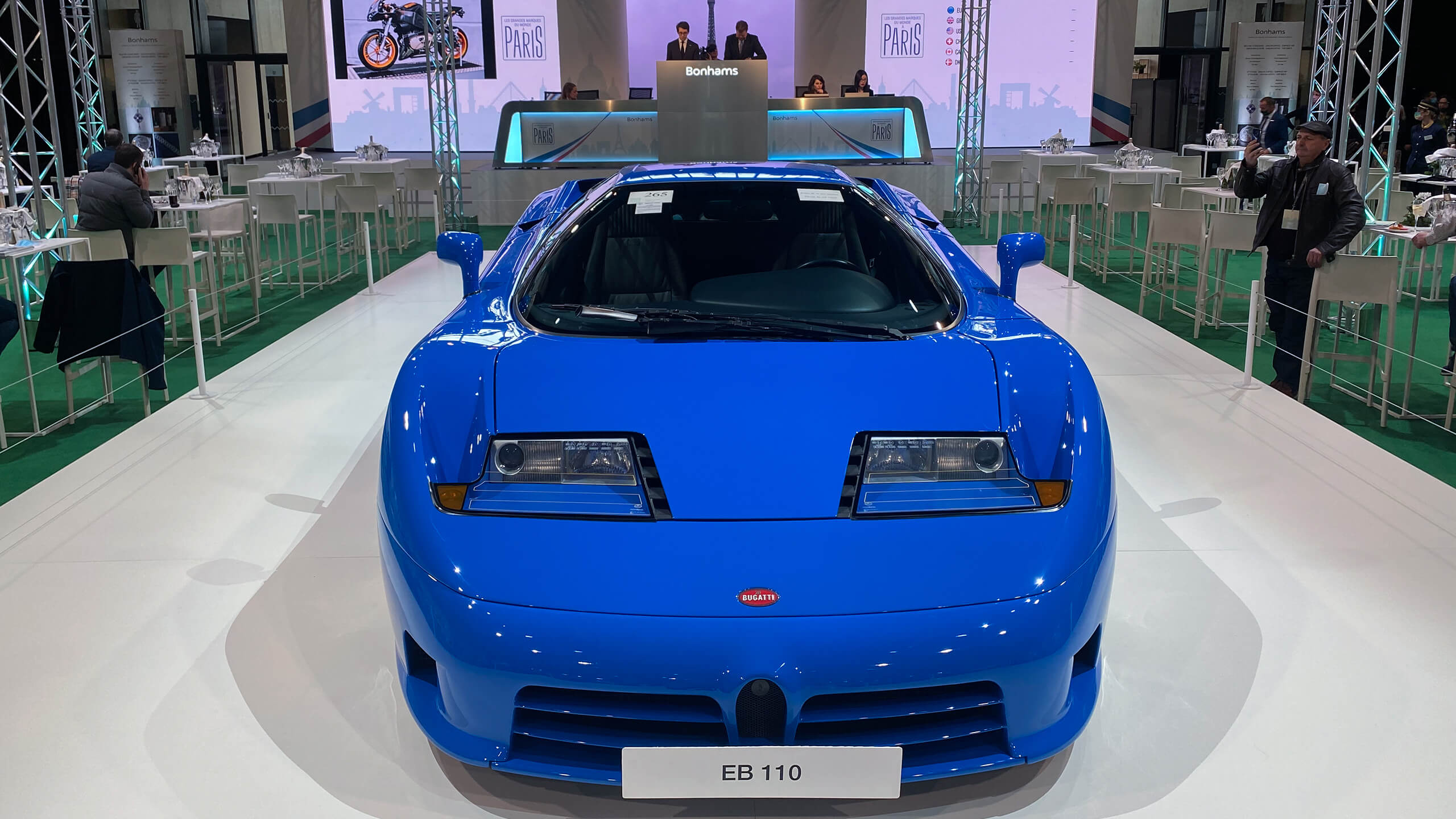 Less than 24 hours after RM’s €23m+ evening blockbuster, it was the Brits’ turn to post results in Paris. This afternoon, Bonhams presented a 112-car catalogue at a new and stylish venue located on the Champ de Mars between the École Militaire and the Eiffel Tower.

The Bond St firm’s regular base, the Grand Palais, is undergoing restoration work and preparation for use in the 2024 Summer Olympics. The ‘Grand Palais Éphémère’ is its temporary, but substantial and cleverly designed replacement and will also be used at the Olympics.

Offering over 100 motor cars was always going to be a marathon rather than a 100mt sprint, and so it proved earlier today. Regular man at the rostrum Maarten ten Holder came out of the blocks at a ferocious multi-lingual pace he maintained until mid-sale when he handed over to a more relaxed Rupert Banner, aided by Bonhams’ usual French-accredited auctioneer Catherine Yaiche. 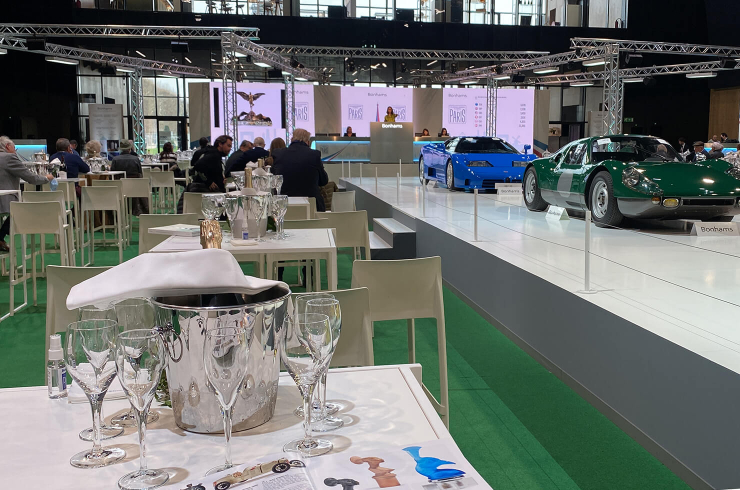 It was a well-organised affair in a terrific location, with mask restrictions eased. Food and drink at tables for the broad mix of private and trade buyers present made it a more open and relaxed event; limited space at the Canadians’ venue meant it was essentially geared for registered bidders only.

The catalogue was a typical Bonhams Rétromobile sale presentation: many pre-War and early Veteran cars; only a handful of big-ticket lots. Many cars were from collections, including the inevitable run of Astons and other cars from the Middle East, some of which did quite well considering the extra taxes due if imported to the EU. 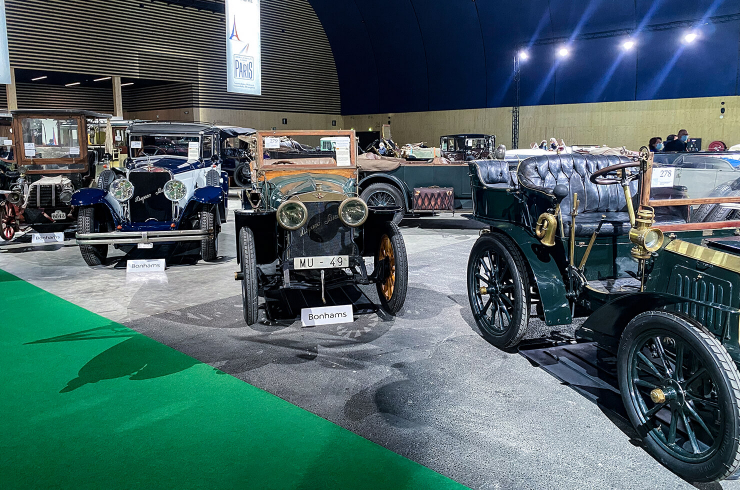 While lacking the screaming headline ‘NO RESERVE FERRARIS’, Bonhams proved that demand is there for interesting entries right across the board, including unfashionable Vintage & Veteran models still popular in parts of Northern Europe. A Belgian modern car retailer bought several very early cars to add to his large collection.

And the figures prove once again the strong start to the year we witnessed in Scottsdale: a similar gross to 2020, but fewer cars sold below low estimate, more above top and an impressive sold-by-number figure of 82%.

While little-known makes and models appeal to the dedicated pre-War – and we’re talking WW1 here – enthusiast and sell accordingly, demand for what used to be costly 1930s touring classics has softened. Neither of the expensive Bugatti Type 57Cs sold, nor did the Invicta or Mercedes-Benz 380K. Top-selling lot was unsurprisingly the LaFerrari. 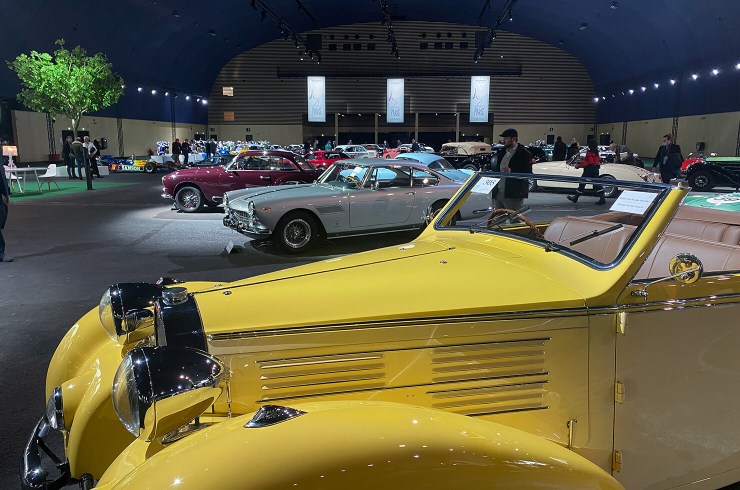 At €1,817,000 gross (around $2.1m) Bonhams’ blue Bugatti EB110 GT just pipped RM’s silver example by virtue of the Bond St house’s higher buyer’s premium. The battle for the car was a highlight of the afternoon, it eventually going for €280k over top estimate. 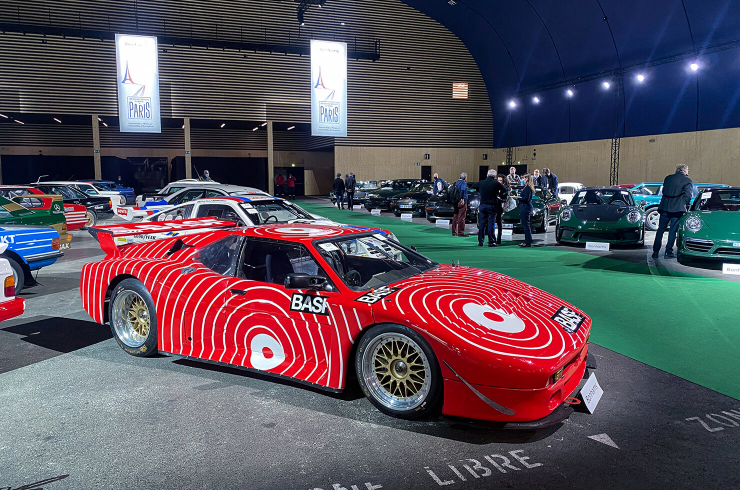 The K500 takeaway on the February 2022 Paris auctions:

The sell-throughs today and last night were excellent: 82% and 91%. Cars are finding buyers, but let’s not get too carried away. The market is polarising. Hot-ticket models such as the 288 GTO, LaFerrari and Bugatti EB110 GT will find new owners in 2022 whatever. Anything else has to be best-of-the-best. No Reserve madness led to some very average Ferraris, almost all requiring work and in normally unfancied bright red, selling well at RM.

We saw some strong figures on good Mercedes 300 SLs in Arizona, but present the market with a nothing-special, non-original silver Roadster with little history and it only just scrapes over low estimate – $1.3m off RM’s late-production, blue alloy-block car at Scottsdale that did not even have its original engine.

A “rising tide” and all that, but this time some boats remain firmly anchored to the bottom of the ocean.

Don’t read too much into today’s stellar prices for pre-WW1 Vintage cars. They are a Bonhams speciality, and the market is tiny, with a handful of more mature, well-heeled collectors fighting over rare and obscure machinery, an arena where ‘Brighton Run-eligible’ is like owning a car accepted for the Mille Miglia Storica but on steroids. The appetite for elegant 1930s grands routiers, let alone limousines and tourers, remains depressed.

We’ve seen it before at Amelia Island and expect more next month when we’ll be reporting live from Florida. Unlike in Arizona, this time Gooding & Co holds a live sale and early preview lots from the Californian firm are impressive.