Another session in the Gooding tent at Fashion Square closed proceedings for the Californians.

A two-day gross of c. $35.5m looks likely, with post-auction sales yet to be revealed.

The auction was conducted at a quieter pace than yesterday, with both gross and sell-through-by-number down. Perhaps by the third day of sales from the Big Three, potential buyers had simply run out of steam.

At a glance from provisional figures (Saturday only): 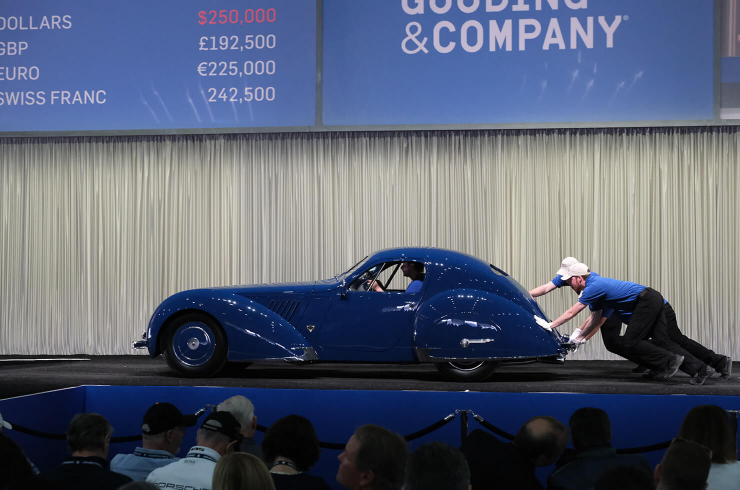 The ex-Onassis Ferrari 330 GTC failed to excite the saleroom, contrary to pre-auction expectations. Its convertible relation, the yellow 330 GTS did, selling for $1.985m all-in, and was a better car with a cleaner history than RM’s $1.71m example last night.

Bidding went all the way on the stately 1932 Hispano-Suiza, which sold well over top estimate to become what should be the second-highest-selling lot this week. Interest also ran high on the Jaguar XK 140 Aerodyne and, more up to date, the two 1980s Ferraris. Usually relegated to bargain basement sales, the superb 1984 400i ($131.6k incl. prem.) and dazzling 1980 308 GT4 ($140k incl. prem.) proved that interest in the exceptional is still out there.

Two of the modern limited-edition Ferraris failed to sell. The 488 Spider 70th Anniversary Edition did, at a below-estimate $368k. These are secondhand cars now and should be treated as such.

Everyone loves a Tucker, and interest drove the price of Gooding’s blue car (pictured, top) just above low estimate. It sold for $2,040,000 with buyer’s premium.

Today’s figures mean that – pending declared results from RM – Gooding will comfortably post the largest total of the Big Three.

Full results to come from K500, with a comprehensive listing of cars sold at Scottsdale this year ranked by marque and model.