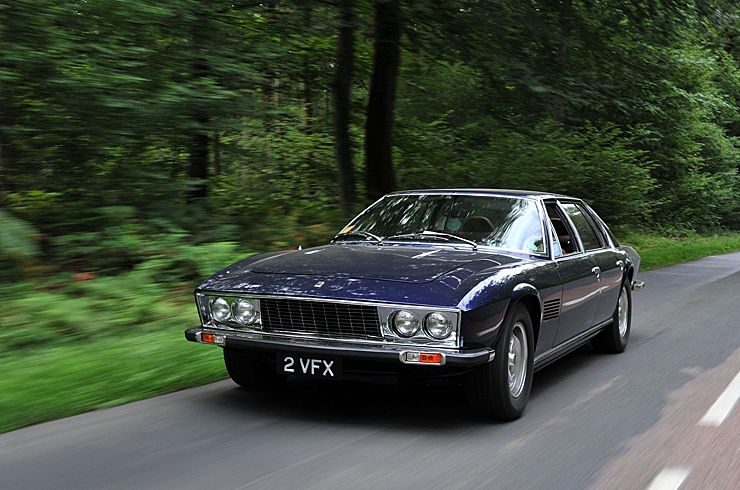 08:30 Saturday, 5 September, an early start. Our eyes met over a damp and slightly cool Pelouse du Prince Henri - Prince Henry's lawn at the magnificent chateau of Chantilly. Simon’s 5.3-metre long Monteverdi 375/4, fondly referred to as ‘HMS Monty’, had been parked in very good company for two days and was raring to go on the 80-mile Chantilly Arts & Elegance Tour.

Press the throttle a couple of times, turn the key and, seemingly in a scene from the Time Tunnel, we are transported to a Can-Am paddock in the 1960s. Not only did we have one of the longest cars in the collecting area, it turned out that – on full choke – HMS Monty was full-throated and champing at the bit (as you can hear above). 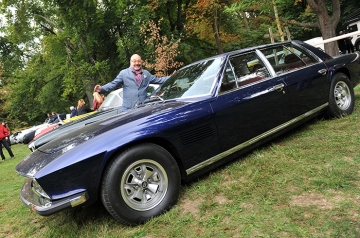 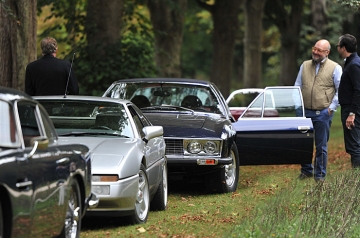 He was full of beans (and more than £110-worth of fuel – but we’ll come to that bit later) and needed a firm hand while in Drive until the temperatures came up. I was driving solo but, picking up the route book with only a degree of trepidation, thought “Surely, what could possibly go wrong? I can always follow someone...”

Which neatly brings me to Reversing Round a Corner and Executing a Three-Point Turn in the sizeable saloon, as within two – or was it three? – corners we were heading in the wrong direction.  Owner of the silver Mercedes-Benz 280 SE 3.5 Cabriolet, we know where you live.

Thankfully, Cathy and Gaëlle, our two intrepid French photographers, were on hand in their convertible BMW to act as tender to the majestic 1977 Monteverdi 375/4, an ex-Qatar Royal Family car, one of only a dozen or so built. 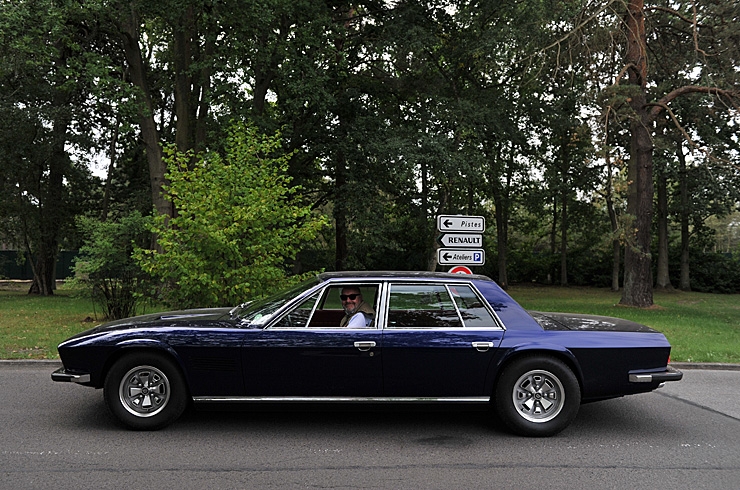 The route took in provincial French villages on market day, and the wonderful countryside surrounding Chantilly. It even incorporated a couple of laps of the motor industry test track at Mortefontaine. The top-secret facility, located deep in a forest, has a combination of tracks including a high-speed bowl and a handling circuit with blind crests and dips. Cathy and Gaëlle bundled into the back and we probably set some sort of record for the longest car seen on the circuit; certainly one of the very few times a Monteverdi has set foot on a track. 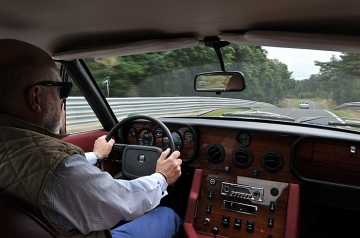 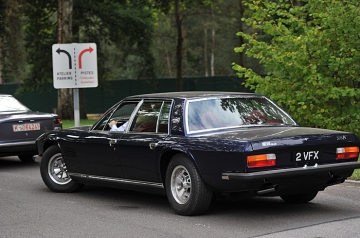 So what’s it like behind the wheel? As previously mentioned, I soon became proficient at reversing Monty into driveways to turn round, or carrying out three-point turns in quiet country roads. You genuinely don’t feel the massive size of the car, much in the same way a Lagonda ‘Wedge’ seems to shrink the faster you go. I’d say the Monty edges it decisively on performance – over 3000rpm the 7.2-litre Chrysler V8 really goes, more than living up its fire-breathing idle – while the British car has a slightly more accomplished chassis.

Take it over 3500rpm and its really moving. And it must have been quite a sight. Already a popular car before we even set off, HMS Monty made friends wherever we went, in the true spirit of the Royal Navy. Via a land-locked Swiss manufacturer, we know, but you get the picture.

It was all going swimmingly well. The car wasn’t missing a beat, the gauges were fine. 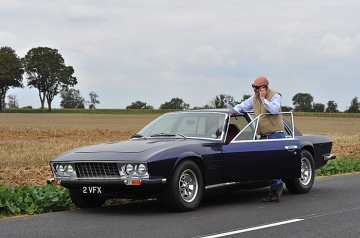 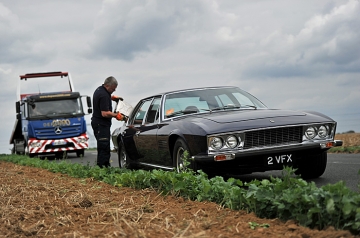 In fact the fuel gauge hardly seemed to move from its steady three-quarter position… which didn’t seem quite right. After 110km, disaster struck. As fast as you can say en panne! the elegant blue saloon coasted to a halt, all 100 litres of fuel drained, guzzled and put away with a smack of the lips. Which works out at 3mpg, but let’s be generous and say 5mpg with the inevitable moving on and off the trailer and generally testing at Kevin O’Rourke’s Mototechnique before leaving the UK.

Thanks to Peter Auto’s superlative organisation, though, we were soon on our way again, and another €50 of Super was added to the contents of the jerry can already dumped in the tank. Slightly shamefaced, Monty and I bid adieu to our ace photographers and we headed back to base and a hasty debrief for Simon, fresh in from Charles de Gaulle and the Concours of Elegance at Edinburgh. 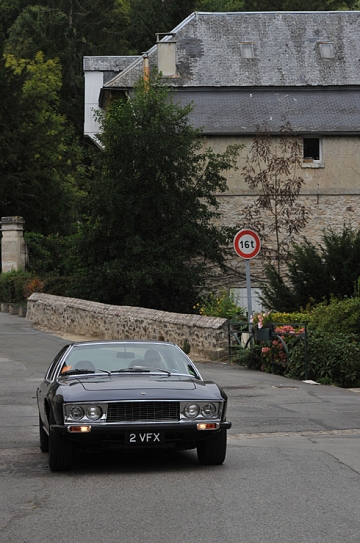 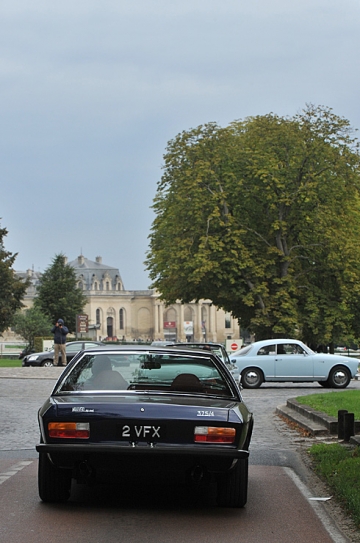 07:30 Sunday, 6 September, another early start. This time the top priority was to prepare the Monteverdi for the judges. We were in the ‘European Chassis with American Engine (Closed Cars)’ class. As expected, the opposition came from Bristol, Facel Vega, De Tomaso, Bizzarrini and Iso. There was even a rare Intermeccanica Italia.

Although no photographs exist to record it, you’ll have to trust me when I say that both Simon and I put quite a bit of elbow grease into preparing Monty for the show ring. When the trio of class judges – Bugatti expert Mark Morris, Auto India founder Gautam Sen and F1 designer Gordon Murray – came to inspect the car we were ready. 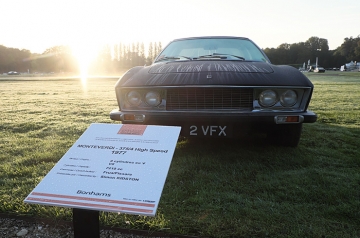 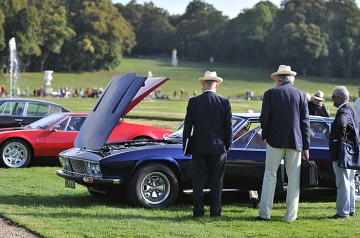 We knew its history, we started Monty up, we opened all the doors, the bonnet and the boot. If not cleaned and valeted quite to ‘Pebble Beach’ standards, the blue car looked smart and, more to the point, looked effortlessly elegant, interesting and most of all ‘at home’ on the manicured lawns of the chateau. We thought they liked it, and hoped we’d be in with a chance.

The next few hours were tense. But finally a golf buggy arrived bearing a representative of the organisers who then stepped out and gave us the good news: second in class behind the German-entered, and admittedly superb, Facel II. Well done, HMS Monty! 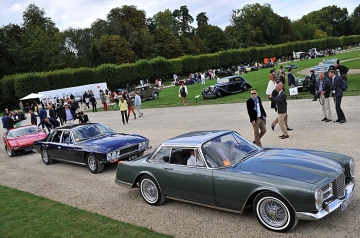 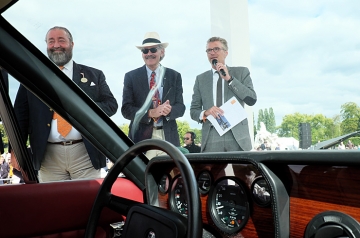 Simon took the wheel for the lap of honour, with me in the passenger seat and some friends in the back. We accepted the prize with grace and, relieved that we’d safely crossed the raised dais – it was that close, apparently – drove back to our position on the lawn: prize-winners.

Touring, driving round a test track and competing (and winning) in a top-level concours d’elegance, HMS Monty had taken it all in his stride.

Postscript: In addition to 'check fuel gauge', the job list for the car when it returns to the UK now includes: ‘fit TV to rear passenger compartment’ and ‘fit iPod connector, with Boney M’s Daddy Cool on repeat play’.

With thanks to our friends at Richard Mille. 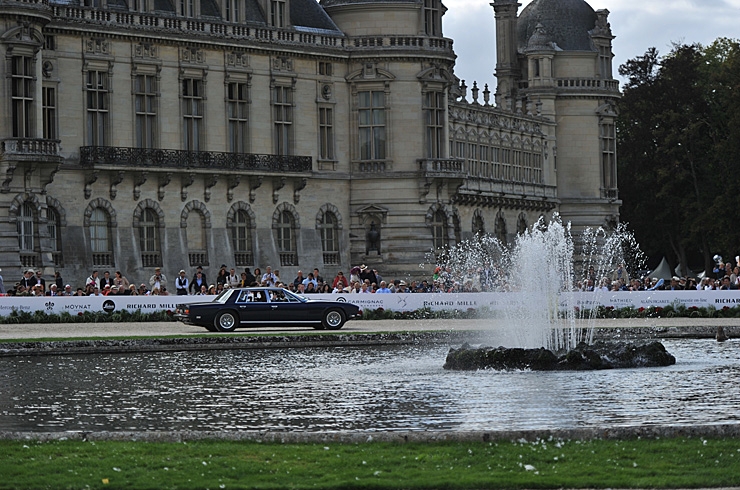 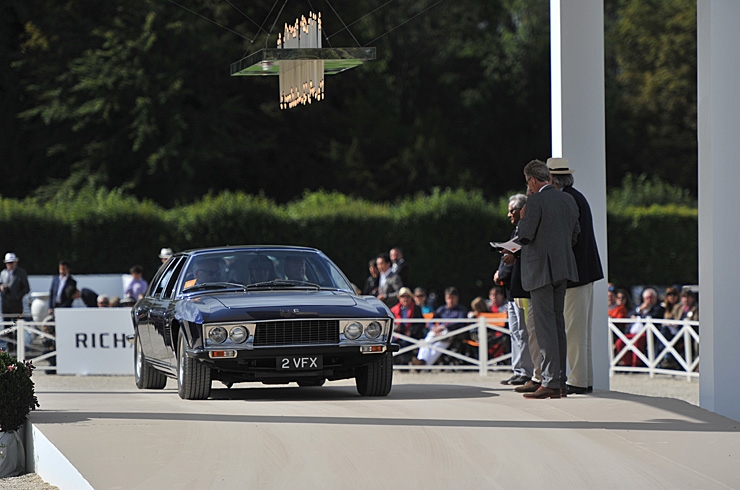 All main photos by Cathy Dubuisson for K500, with additional shots by K500 - Copyright 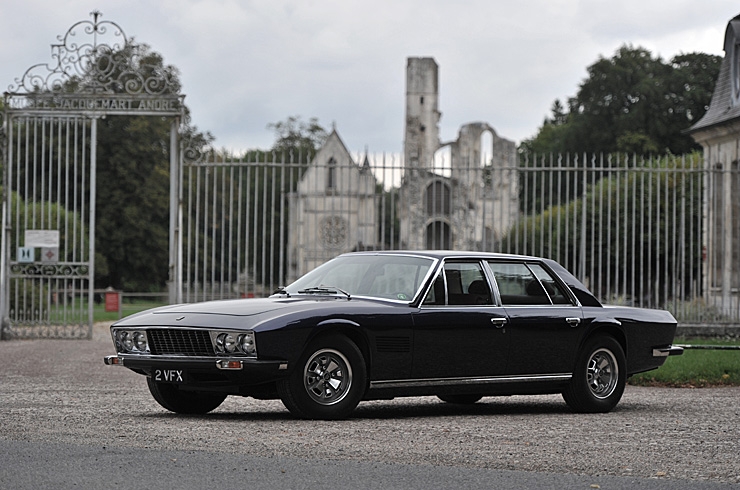