The Men Who Made the Market – Nicholas Mee 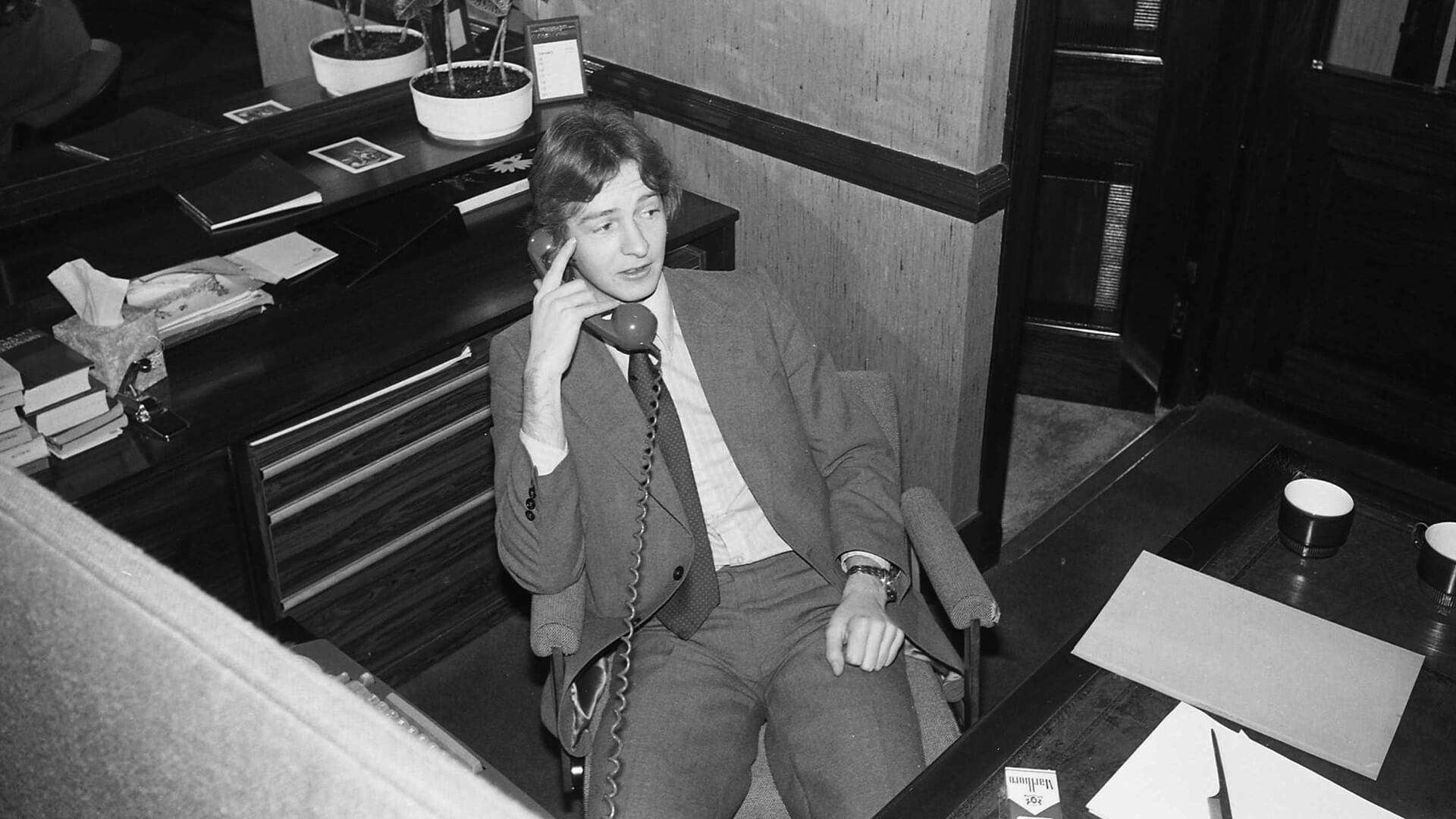 “I’ve been fortunate to meet and deal with a great number of influential people from the UK and overseas. I’ve met captains of industry, prime ministers, royalty, nobility and many celebrities. I’ve sold cars to scrap metal merchants educated at Eton, and barons who threw their lives away squandering family fortunes…”

Nicholas Mee is looking back over a career during which he’s become synonymous with Aston Martin. He joined the company in January 1976, as a 23-year-old sales executive (above) at Aston Martin Sales Ltd in Knightsbridge.

“One of my earliest recollections was my first encounter with a long-term Aston owner. After passing pleasantries and establishing his credentials, he proceeded to give me a lecture on the brand. It was at this point that I realised selling Aston Martins to existing owners was not going to be easy. They knew much more about the products than I did.

Aston Martin had only recently restarted production following its 1974 closure, but Mee recalls the 'masterstroke' that the marque’s new owners produced towards the end of 1976 – the William Towns-designed Aston Martin Lagonda.

“It was featured on the News at Ten and was front-page news in The Times and Daily Telegraph, mostly because of its futuristic looks and ground-breaking electronics.

“Of greater significance, though, was the fact that Aston Martin was suddenly perceived as alive and kicking. It is arguably one of the most important models ever to have been launched by the company, and on the show stand new customers queued up to sign order forms and hand over cheques.”

But against a backdrop of ongoing industrial unrest, British enthusiasts were increasingly unwilling to display their wealth by buying an Aston Martin. Fortunately, says Mee, oil-rich customers from the Middle East had no such qualms. 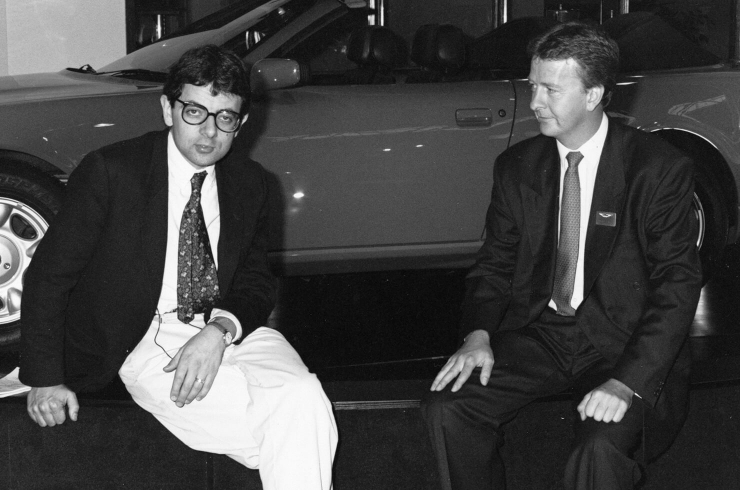 Nick with a youthful-looking Rowan Atkinson, a staunch Aston enthusiast

“Our showrooms in Sloane Street were well positioned, near Harrods and the Carlton and Park Tower hotels. Selling to these guys was a whole new ball game, one of bright colour combinations, complicated specs and tricky negotiations.

“One occasion I particularly remember involved a new V8 Volante, built for a Saudi customer as a firm order in white, with white hides and hood. The client’s entourage arrived one morning to collect it. We had not been paid, so I explained we could not release the car until the balance of payment was received.

“There followed a great deal of discussion that lasted all day: ‘Why don’t you trust the Saudi royal family? It is an insult, he will cancel the order, we are not able to collect the funds from the bank until tomorrow,’ etc. Their cars were parked all along Sloane Street.

“At the end of a long and tiresome day, the car stayed in the showroom and I had no idea how this was going to play out. The next morning, I arrived at the office to find a plastic carrier bag sitting on my desk containing some £60,000 in cash, all bound in Crockfords casino wrappers.”

Even so, life was difficult during the late 1970s and early 1980s, and Aston Martin became reliant on a number of regular, and enthusiastic, customers to see it through. During 1984, however, the British economy was showing signs of life and the Livanos family’s investment gave the business fresh impetus.

Mee recalls how the introduction of the V8 Vantage Zagato put the marque “back on the high-performance map”, and when Aston Martin Sales moved from Sloane Street to an ex-Rolls-Royce showroom in Cheval Place, things were definitely looking up.

“It’s been interesting to put my finger on a moment in time, when I could say the world of AM Sales stepped up a gear and life at Cheval Place became its most enjoyable. That was probably 1986, the year of EFI engines built with the help of the first CNC-machined heads and blocks.

“There was also a substantially remodelled Lagonda, the Vantage Volante and much-improved Vantage. Right across the range there was better suspension, modern wheels and tyres, updated air-conditioning and a raft of changes, improving overall quality.”

Two years later, Ford bought a 75 per cent holding in Aston Martin: “The effect this had on the company, including AM Sales, was precisely… zero. Ford left us to get on with what we were good at. Despite what’s been said over the years, AM Sales was very profitable and Aston Martin itself was starting to make money, too.”

In particular, Mee has vivid memories of the October 1988 launch of the new Virage at the Birmingham International Motor Show.

“It was to be heralded by a trumpet voluntary played by a contingent of the Coldstream Guards. Until, that is, the organisers refused permission on the grounds of excess noise. ‘Okay,’ said Victor Gauntlett, ‘in front of the world’s press and TV, I’ll have the trumpeters mime it! How do you feel about that?’

“As he often did, Victor got his way and the car was launched with a massive fanfare and to much acclaim. This was it, what we’d waited so many years for – a replacement for the magnificent, but by then rather dated, V8 range.

“In order to limit speculative orders, we’d introduced a higher-than-normal deposit for new orders. Nobody knew what the exact price would be when deliveries were due to start in January 1990. We settled on a deposit figure of £20,000, to secure an order accompanied by a signed contract. Some were scared off, but other wealthy speculators were confident in their punt. Within just a few weeks we had amassed enough orders for 18 months, taking us well into 1991.

“Fantastic – all that was needed now were the cars. Except, by the time they started to come through, the UK was heading into another nasty recession…” 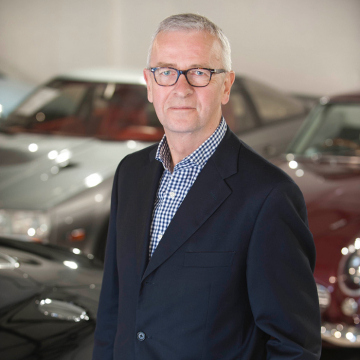 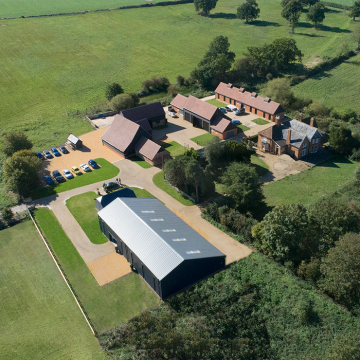 Mee left at the end of 1991 to set up his own specialist business, which has gone from strength to strength, but he looks back on his time at Aston Martin Sales with great fondness.

“I consider it an honour to have worked, as I do today, for a brand I believe in, with great passion. Serving Aston Martin gets into the blood and, like a drug, once it’s there it never leaves.”