The image of Steve McQueen looking skywards with the right cuff of his racing overalls conveniently pulled back to reveal a prominent Heuer Monaco is so well-known to so many watch and car enthusiasts that it must qualify as a cliché.

As a K500 reader, you won't need reminding that the (possibly enhanced) shot comes from the 1971 motor racing film Le Mans in which McQueen plays Michael Delaney, a driver who spends as much time wrestling with his mental demons as he does with the controls of his Porsche 917K.

Even McQueen's greatest fans must agree that the dialogue is sparse and the plot feeble, but the ground-breaking nature of the  'point-of-view' camera work and heart-stopping car-to-car action made the film a cult classic.

And now, almost fifty years after its release, the often eye-watering value attached to objects once owned, worn, driven or ridden by the so-called 'king of cool'  again looks set to be realised with the sale at Phillips, New York of one of the Monaco chronographs used by him during the filming of Le Mans.

The exhaustive, 10-page catalogue offers an 'estimate on request' – but since one of the other watches from the six supplied for the film fetched $87,600 in 2009 and a second (worn by McQueen for publicity shots) made $799,500 three years later, it's safe to assume that anything less than a million for this one will leave the vendor disappointed.

The man in question is Haig Alltounian, McQueen's chief mechanic throughout the making of the film and to whom the star gifted the watch on 'wrap' day as a thank-you 'for keeping me alive'.  According to Phillips, Alltounian wore the watch for around two years before wisely placing it into the safe deposit box where it subsequently sat for the best part of half a century. 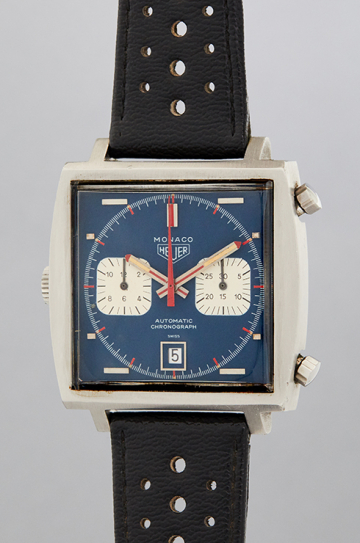 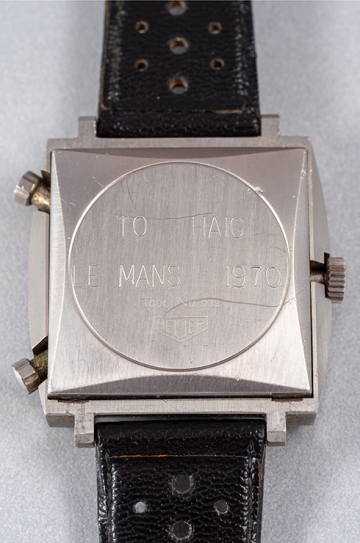 As a result, the engraving on the back 'To Haig Le Mans 1970' (said to have been applied before McQueen surprised Alltounian with the watch) is crisp and fresh, while the case and dial remain unrestored and to factory specification.

Add that to the remarkable and indisputable provenance, and the result is a dream lot for any lover of McQueen, Heuer or the Le Mans film - and enough to drive fans of all three into a frenzy.

The McQueen-worn Heuer Monaco will be offered at Phillips' 'Racing Pulse' sale in New York on December 12 along with a Rolex Cosmograph Daytona originally owned by the late Paul Newman and the actual Panerai owned by Sylvester Stallone and worn by him in the 1996 film Daylight. It's said to be the watch that bought the previously little-known make to prominence.

And for the facts, the whole facts and nothing but the facts, about how Heuer watches came to feature in Le Mans, see page 104 of Jack Heuer's autobiography 'The Times of My Life'... it's an interesting read.